We are pleased to introduce Sophie Paquette, our Creative and Art Director / Producer at PLAYMIND.

Here is the content of an interview we conducted to learn more about her background, work and where she finds her inspiration!

First, tell us a little bit about your background.

I have always been fascinated by video games. It was clear from a very young age that I wanted to work in this industry. I was 14 when I decided that this would be my future career.

I was living at the time in a small town and was a rebel girl with bad grades in highschool. I was told I should become a hairdresser. But I did not give up and their words did not stop me as I am one stubborn girl. I went to college in Ottawa. It was everything I could dream of and more. I fell in love with everything I learned and spent countless hours, countless nights working on perfecting my art and learning about games and their mechanics. It never felt like work, just fun and challenges!

At age 19, I started working in architecture previsualisation as a 3D generalist in the Montreal area. I met with a lot of fantastic people that became friends. But I was looking for something more creative and more related to my first love: video games!

I worked at Gameloft as a 3D generalist. It was a lot of fun. As a passionate and well organised person, within a year, became a lead artist on multiple projects such as  Gang$tar games from L.A. to Vegas, Midnight pool and poker, Guitar rock tour and many more. 6 years later, as the company and projects grew, so did my responsibilities. I became less hands on, I was missing the creation part of my job.

That’s when I decided to go try a smaller indie company called Minority Media. There I would wear many hats: Lead Artist, Tech artist, Modeler, Concept artist …etc. which fits my personality. The projects were super motivating. The company decided to take the big VR jump and I was THRILLED ! We made a lot of prototypes and games. Some were good, some not so much but that really built my expertise and fed my creative mind. That is also when I met with Emmanuel Sévigny, the CEO of PLAYMIND at a business trip in Texas for the SXSW event in 2017.

After 5 years, I decided it was time for me to jump to a new exciting challenge and went to FrameStore which is more of a movie company. They were opening a VR department and needed expertise and people motivated to bring this technology into the interactive world and bridge it with the traditional movie VFX making.

What brought you to PLAYMIND? Why did you choose this studio?

So since 2017 I have kept in touch with Emmanuel and he has been talking to me about all his projects and ideas. I was really interested in the company’s projects.

PLAYMIND is also always looking for new innovative ways to create entertaining and immersive experiences and games. Which was a perfect match to stimulate my creative mind and never get bored or sick of the projects since they always are too different.
So, I decided to drop everything and jump on the crazy PLAYMIND train!

What is your role in the company and what's a typical day like for you? 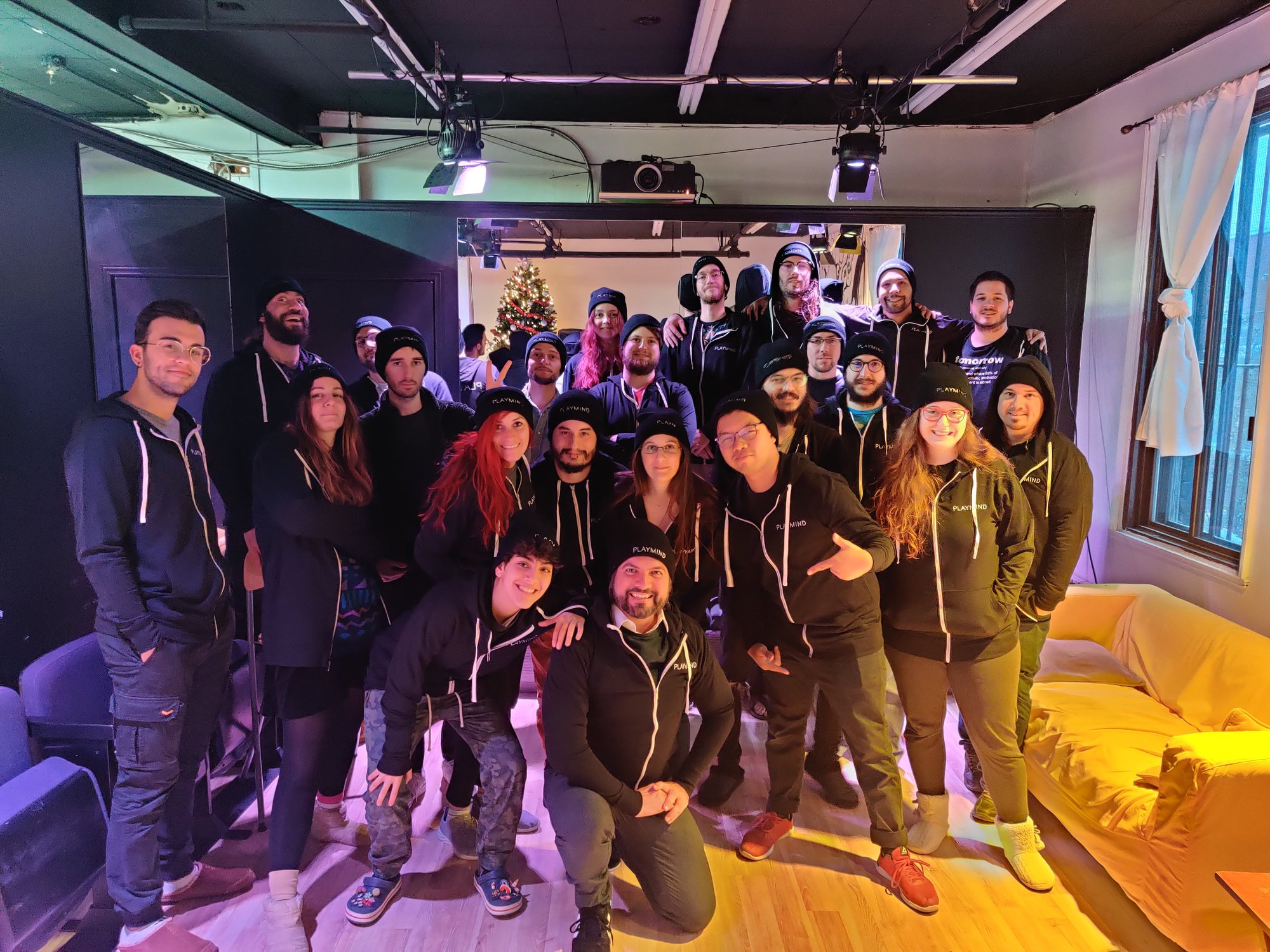 At PLAYMIND we work in a scrum style agile workflow, which means our workflow process is based on a repetitive approach. Scrum emphasizes continual improvement for customer satisfaction. We therefore start the day with a daily meeting to make sure everyone has what they need to achieve their goal.

My afternoons are never the same! I split them between the different responsibilities I have. Some days I put on the producer hat and spend a good part of my day doing evaluations and follow up for the project, some days I spend writing or reviewing design documents trying to find new interesting ways to improve our project or create pitches for new  ones. Other days I will sit down with my wacom and draw concept art for new upcoming titles. All of those are always intercepted with reviews, questions and feedback in the team when needed and sometimes playtest to ensure quality of the projects.

Everyday comes with its surprises and challenges, I need to be on my toes to be able to react and adjust all the time which is what makes it so exciting and fun!

Of course, my priority is always the team!

You are in a very creative field, how do you find inspiration?

Can I be super cheesy for a second and just say you won’t find inspiration, it finds you? Haha oh man it’s true though! It comes in the small things, randomly and for me mostly at night.

I hold a pen and notebook next to my bed to write or draw some ideas in the middle of the night … and that happens more than I would like to admit!

What is a misconception about your job?

A Creative Director or Art director is not the one that has the answer to everything or is best at doing everything. My job is to spark creativity, start an idea and ensure it blooms. I also do my best to cultivate productivity in the team and motivate by engagement and participation in the creation process. I am the one that has the overview of projects and can make decisions based on what’s happening in the other sphere of the project and departments.

I surround myself with the best talent out there and make sure we head the same direction for the good of all. Being a smaller indie company all the ideas are welcome, it’s my job to make sure they all fit together but a director is nothing without a kickass team!

You also work in all aspects of production management. Can you explain to us how the process of creating a Playbox game works?

We really want to have a catalogue that brings choice and variety to the player so that everybody finds a game (or hopefully multiple games) that they really enjoy. Before we start any project we analyse our existing games, what is the market response to them, and will think of a concept that will bring something different and popular. When the main idea is put together, we bring in our game designers, they will take over the idea and add all the details, mechanics and flow. Once done with the Game Design Document, that’s where the fun begins.

The whole team is brought in for a kickoff meeting. A lot of ideas are usually brought in at this point. Then we start production, we have a 2 weeks sprint system so we establish the goals that are bite size tasks which we can attain in 2 weeks, after every sprint, we look at the game, we play, we talk and we iterate allowing us to adjust as we go. 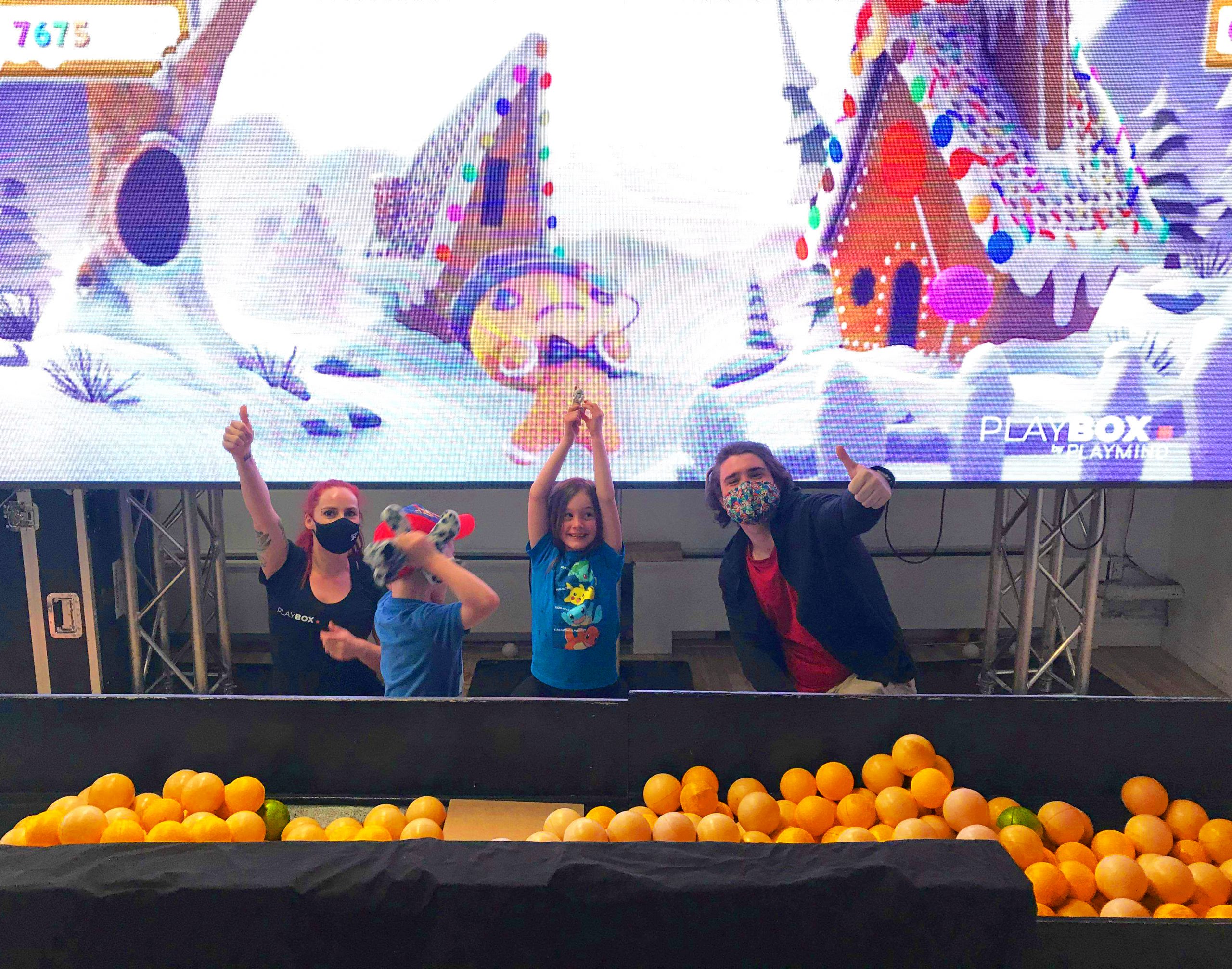 It is a really organic way of developing a video game and it is super important to do since a mechanic or idea that sounded fun on paper might not turn out as cool in the end so we are able to see, catch and fix that before it is too far in the production. We also have a lot of fun during those playtests.

I like it’s versatility, which is also the biggest challenge. I love that having one box can offer potentially an infinite amount of games.

I also really love the physical aspect of it. It brings families and friends together.

Finally, we talk about the Playbox, but it's only a section/part of PLAYMIND, what other projects are you currently working on?

We are really busy currently working on 3 new Playbox titles, we are developing 3 new product concepts that I cannot wait to tell everyone about.

Also working on an AR experience for a museum along with some more traditional video game productions, finishing up a mobile game and a console/pc online game.

In total we have about 12 different projects cooking!

Director of Brand and Digital Management at PLAYMIND

Play the Playbox, collect points and redeem them for rewards.

Over 10 different games available! Don’t miss the chance to test it!